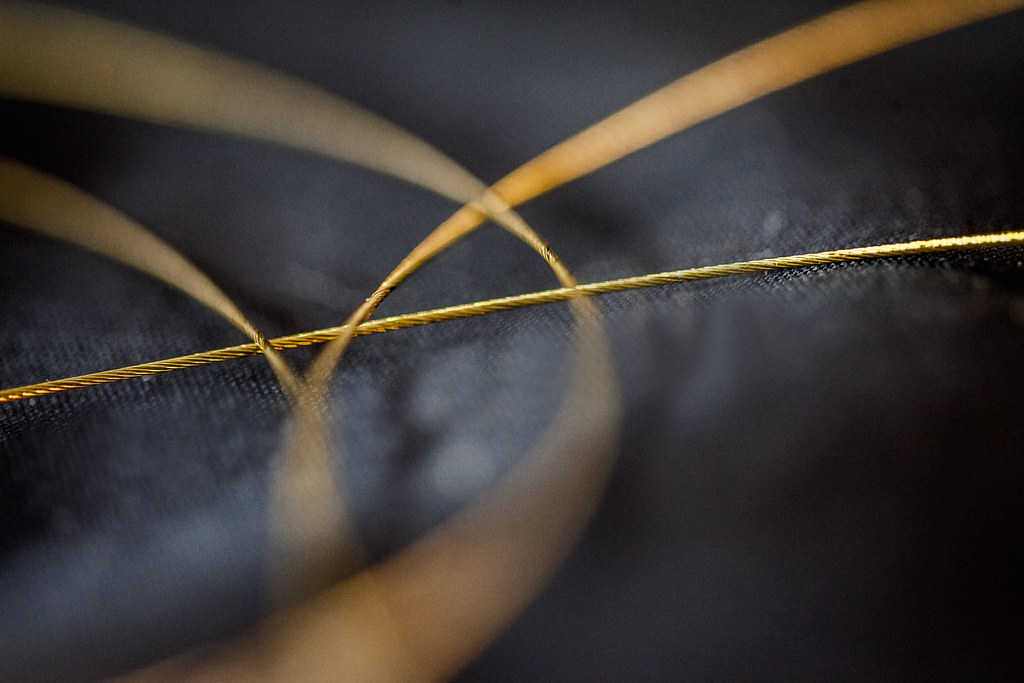 “Gold Wire” by avrene is licensed under CC BY 2.0

What is 4 Wire Resistance Measurement ?

What is Kelvin Bridge ?

The basic principle of the Kelvin 4 wire resistance measurement is based on Kelvin Bridge. Kelvin Bridge is a modified version of the Wheatstone bridge used to measure the very low resistance value, which ranges from 1 ohm to 0.00001 ohms. In this bridge, the effect of load resistance contact resistance and the resistance of the lead wires are taken into account.

in the figure is the connecting lead wire Resistance.

And when the galvanometer is attached to the point ‘b’, which is between ‘a’ and ‘c’ point, in such a way that the ratio of lead resistance from ‘a’ to ‘b’ and ‘c’ to ‘b’ is the same as the ratio of

Now the overall equation of the circuit become

From equation 1 and 2 after solving we get :

The final equation is the same as the balanced Wheatstone Bridge, which shows that connecting lead wire has been eliminated by connecting the galvanometer at point ‘b’.

is eliminated with the kelvin bridge.

What is 4 Wire Resistance Measurement ?

The wire which is used in voltage measurement is connected straight to the legs of the resistance, which is to be measured, and the voltage metre is used in this method is of high impedance so that minimal current passes through it. With a small current through the wire, the overall voltage drop across the wire is negligible, which doesn’t affect the value of the measuring component voltage drop. This method eliminates the wire resistance, which is also called Kelvin or four-wire method. Hear special connecting clips are used, which is known as Kelvin clips.

Kelvin clips are also known as alligator or crocodile clips. Each half of the jaw of a Kelvin clip is insulated from one another; both Jaws of the Kelvin clip are electrically common to each other, which usually joint at the high point. The current delivering wire is connected to one jaw, and the voltage measuring wire is linked to the other jaw. Kelvin Clips are used when the accuracy of the measurement is required high.

What are the Applications of 4 Wire Resistance Measurement ?

What are the main Disadvantages of  4 Wire Resistance Measurements ?

As we can see from the above figure,

are the lead wire resistance. This is because the Voltmeter measures the voltage drop across

In this method, the switch is used, so at first, the upper loop of the resistance is measured, the Voltmeter measures the voltage across

, then divide the value by 2, which gives the average resistance of these two wires.

is assumed to be the same as the avg. of

Then, switch the circuit to the regular connection, which measures the measuring component and the resistance of wire

. The calculated value across

then compared with the first measured value

, which is used to eliminate the lead resistance produced by the wire from the measured value.

What is actual working of 2 wire 3 wire and 4 wire types of resistance temperature detector i e RTD ?

The error introduced by the lead can cause a significant error, so there are very few applications of 2 wire RTD, 2 wire RTD is used with short lead wire or where high accuracy is not needed. Three-wire RTD measurement circuit that minimises the effect of lead wire resistance as long as the connecting wires are of the same length. Some factors such as terminal corrosion or loose connection can still significantly differentiate the lead resistance.

What are the disadvantages of the method of measuring resistance of a wire utilizing an ammeter and a voltmeter in a circuitry ?

What is the resistance of an electric heater?

According to Joule heating or Ohm heating, heat is proportional to resistance. Joule heating is a process by which electric current passes through a conductor produces heat, so for an electric heater, there must be high resistance in the wire.

What are the factors affecting the resistance?

Will a thick wire have more resistance than a thin wire Why ?

The thin wire usually have greater resistance than a thick wire because the thin wire has fewer electrons to carry the current and In comparison, the thick wire has more electrons to carry the current. In addition, the relation of resistance and area of cross section of a wire is reciprocally proportionate, because of this if cross section of a wire reduce, the value of wire’s resistance will be higher.

How to increase the resistance of a wire ?

The increase in length of the wire or decrease in the area of the cross-section of a wire increases the resistance.

What is the cross sectional area of a wire?

Why use a high impedance voltmeter ?

Is temperature is directly proportional to resistance ?

The temperature is directly proportional to resistance for a metal conductor or the metal with a positive temperature coefficient.

What are the effects of temperature on resistance?

Can a wire have zero resistance?

Why do we use three-wire RTD?

What is the benefit of a four-wire resistance measurement?