Hydraulic diameter can be found using the formula given below-

Hydraulic diameter is a function of hydraulic radius Rh, which can be found by dividing area of cross section, A by wetted perimeter, P.

This relation is different from the conventional relation between diameter and radius (i.e. D = 2R). This difference arises only while converting non-circular cross sections to circular.

This number shows the effect of viscosity in controlling the velocity of flowing fluid. A linear profile of viscosity is developed when the flow is laminar. In Laminar flow, the fluid flows in such a way that it appears as if it was flowing in parallel layers. These layers do not intersect each other and move without any disruption in between them. This type of flow usually occurs at slow speeds. At slow speeds, mixing of two layers doesn’t take place and fluid flows in layers stacked above one another.

Laminar flow helps us to measure the flow of highly viscous fluids as this type of flow gives a linear relationship between flow rate and pressure drop. Favorable conditions for laminar flow is high viscosity and low velocity. At greater speeds, the fluid particles start behaving in a different manner resulting in mixing of fluid layers. Such mixing gives rise to turbulence and hence the name turbulent flow. Turbulent flow is desirable when proper mixing of fluid is required. One such example is mixing of fuel with oxidizer in rocket engines. Turbulence helps in thorough mixing of fluid.
Reynold’s number can be calculated from the equation given below-

Where,
Re is Reynold’s number
u is mean speed velocity (in m/s)
ν is kinematic viscosity (in m2/s)
Dh is hydraulic diameter (in m)

Circular pipes are most commonly used pipes for transporting fluid/gas from one place to other (even for large distances). Water pipelines are real life example of circular ducts that are used for transporting fluid. These pipes can carry large distances such as from water filter stations to homes as well as short distances such as ground water tank to terrace water tank. The hydraulic diameter of circular pipe is given by-

Where,
R is the radius of circular cross section. a and b are the lengths of larger and shorter sides. 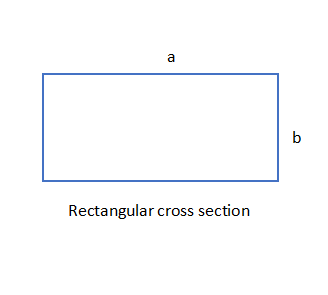 Where,
a is the length of each side of square.

Sometimes, to increase/decrease the rate of heat transfer, two fluids are passed through an annular tube such that one fluid flows outside the other. heat transfer rate is affected by the action of two fluids. Hydraulic diameter of annulus is given by-

Where D and d are diameters of outer circle and inner circle respectively. Where,
l is the length of each side. Where,
a and b are lengths of shorter side and longer side respectively.

In shell and tube type heat exchanger, tubes are installed in a cylindrical shell. Both hot and cold fluids are passed through these tubes in such a way that one fluid flows outside the other fluid. Due to this, heat is transferred from one fluid to another. Shell type heat exchanger is widely used in industries mainly in chemical processes and applications where high pressure is needed.
Shell tube heat exchanger has annular cross section hence, hydraulic diameter is given by The ratio of length of shorter side to longer side is called as aspect ratio.

a and b are length of shorter side and longer side respectively.

Recent studies have concluded that equivalent diameter being derived from empirical relations, is not reliable while calculating pressure losses in pipes. Hence, we use hydraulic diameter in all cases.

What is the difference between hydraulic diameter, equivalent diameter and characteristic length in fluid mechanics and heat transfer?

Hydraulic diameter, as discussed earlier, is the newly derived diameter from a non-circular duct such that the flow characteristics remain same. Hydraulic diameter is used for calculating Reynold’s number which helps us to understand whether the flow is laminar, transient or turbulent.

The diameter of circular duct which gives same pressure loss as rectangular duct for equal flow is called as equivalent diameter.

Pressure loss in a pipe is given by Darcy-Weisbach equation-

What is the difference between hydraulic radius and hydraulic depth / hydraulic mean depth?

The ratio of cross sectional area of flow to the wetted perimeter is called as hydraulic radius.
Rh = A/P

The ratio of cross sectional area of flow to free water surface or top surface width is called as hydraulic depth.

A is the cross sectional area of flow
T is the width up to top surface or free surface.

What is the physical significance of hydraulic diameter in fluid and thermal sciences?


Practically, Reynold’s number is used to check the behaviour or nature of the fluid flow. This in turn helps us in finding Nusselt number which is then used to find the rate of heat transfer from the closed conduit.
Hence, Reynold’s number is a very important dimensionless number which plays a vital role in both fluid and thermal sciences. But to find Reynold’s number, first we need to find hydraulic diameter of the closed conduit. For non-circular cross sections, hydraulic diameter provides a value of diameter such that its flow characteristics are equivalent to that of a circular cross section.

Nusselt number is given by following relation-


The ratio of momentum diffusivity to thermal diffusivity is called as Prandtl number. It is named after German scientist Ludwig Prandtl. This dimensionless number helps us in calculations related to forced and natural heat convection. Its significance is that it helps us to study the relation between momentum transport and thermal transport capacity of fluid.

Prandtl number is calculated by the formula given below-

Where,
Pr is Prandtl number
µ is dynamic viscosity
Cp is specific heat

Note that Nusselt number can also be found using the relation: Nu = hLc/k, when we know the values of convective and conductive heat resistances.

In simple words, hydraulic diameter forms the basis for finding the behaviour of flow and rate of heat transfer from the fluid that is flowing in a closed conduit. With that, it also brings us easy calculations by converting a non-circular conduit to a circular one.

Hi ....I am Abhishek Khambhata, have pursued B. Tech in Mechanical Engineering. Throughout four years of my engineering, I have designed and flown unmanned aerial vehicles. My forte is fluid mechanics and thermal engineering. My fourth-year project was based on the performance enhancement of unmanned aerial vehicles using solar technology. I would like to connect with like-minded people.